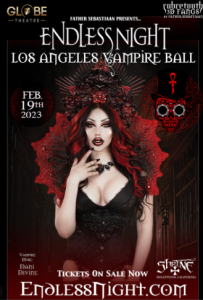 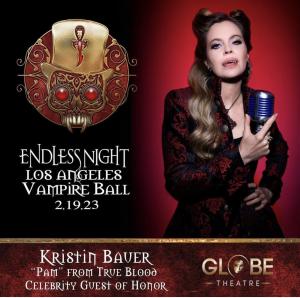 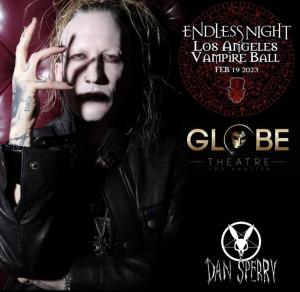 The Endless Night Vampire Ball can best be described as a Venetian Masquerade Ball meets a Vampire Court, with the energy of a Rock Concert and the elegance of a Burlesque Cabaret”
— Father Sebastiaan

Those lucky enough to secure the coveted tickets to the Endless Night Los Angeles Vampire ball before they are gone will experience an evening unlike any other. A celebrity red carpet featuring Actress Kristin Bauer as the celebrity host and guest of honor. Kristin played vampire Pamela Swynford De Beaufort on the hit HBO television series True Blood. The jaw-dropping magic of shock Illusionist Dan Sperry promises to be a highlight of the evening, bringing his unique, never-before-seen shocking illusions to life at the Ball. Other thrills at the Ball include the vocal stylings of the iconic British rock band Gene Loves Jezebel and an exquisite belly dance by Nikiski Noir. The Endless Night Vampire Ball signature cocktail, "The Bloodbath," a heady mix of chartreuse, cabernet, and cranberry juice, will delight the tastebuds of revelers who turn out for the event in the spectacular Edwardian, Victorian, and Vampire themed costumes. A best-dressed competition celebrating their finery and the cult classic dance "The Time Warp" will cap off the evening's extraordinary revelries.

Tickets to the 2023 Los Angeles Endless Night Vampire Ball can be purchased on Eventbrite and range in price and exclusive offerings from $65 general admission to VIP guest offerings at $2,300

About The Endless Night Vampire Ball

Endless Night began in 1996 as the "Vampyre Ball of New York" with the "Main Gala Event," the New Orleans Vampire Ball, over Halloween weekend at the House of Blues annually since 2000. The Endless name Night comes from William Blake's poem "Auguries of Innocence," in which he states, "Some are born to Sweet Delight, Others are born to Endless Night."

Father Sebastiaan has been active in the Vampire / Vampyre subculture since 1992. He is a Master Fangsmith, published author, and Impresario of the Endless Night Vampire Ball. Father has appeared on Travel Channel's Ghost Adventures, CW, History Channel, Discovery, and MTV. He's been featured in the New York Times, Glamour, Cosmo, Revolver Magazine, and many more. He travels between Paris, New York, Florida, New Orleans, and Los Angeles, making fangs and hosting events.

About The Globe Theatre

The historical landmark, the Globe Theatre, was built in 1913 in Downtown Los Angeles. It is considered one of the oldest functioning theatres on Broadway and still maintains its original iconic Beaux Arts architectural style.

For inquiries or corrections to Press Releases, please reach out to EIN Presswire.
✕
× Close Ad